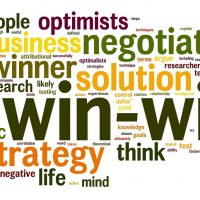 Negotiating for a Successful Outcome

Negotiating for a successful outcome in real estate negotiations is a critical skill that is often under valued and over looked by both professionals as well buyers and sellers alike.

Often times an offer will come in lower than asking, and rather than negotiating for a successful outcome, the offer will be outright rejected.

Both buyers and sellers as well as their representatives should be prepared to work together on the details of an offer- often an offer can be successfully negotiated on a variety terms to reach a positive and mutually beneficial agreement.

Often times, sellers that have previously rejected offers that were lower than their expectations end up reducing the price of their home at a later date in order to attract more buyers and hopefully offers.

Being prepared to yield a bit on the terms of an offer can net great results.  Sometimes offers go back and forth several times, and while price might be the initial sticking point, faster closing dates, removal of chattels included, and quicker condition deadlines can also help with the decision making process.

Attempting to reframe focus on the bigger picture and focusing on the end goal can be helpful while becoming absorbed in the smaller details can detract immensely from the whole process.

Sometimes inspections, zoning regulations, by laws and such can create issues that crop up after an offer has been accepted, but before it has become firm.

During this time, when problems crop up, it is best that everyone tries to work together to resolve the problems in a manner that is mutually favourable.  Tactics such as bullying rarely produce results and approaching issues with an open mind is usually the best approach for all parties.

In summary, when it comes to real estate negotiations, there is no room for ego;  negotiating for a successful outcome should always be at the fore front.

Danielle was the best agent we could have ever asked for! She helped us sell our home and find a new one in town. Danielle made us feel like family, was available through text whenever we had questions, and was always willing to take us to see various houses over a few week period until we found one we loved. She worked with our schedule always, and helped us make an offer on a beautiful home! We bought our previous house privately and wouldn’t ever recommend doing it privately again. If you’re using an agent, we highly recommend Danielle with RE/MAX.

Thanks so much Danielle  for you help over the past several years. You made both times that my family used your services a really positive experience. You were very professional, patient, honest and understanding with my families needs in a finding a great home that met all of our needs. Even though you are a very busy agent and had several clients on the go at once you always made us feel as if I was the only client you had at the time. I appreciated that you always had a smile on your face even though sometimes I became discouraged with the housing market as houses were being sold so fast. Your upbeat personality was really helpful during such a stressful time for me and my family. I would not hesitate to seek out your professional services again or recommend you to anyone, you seemed to know what people need even if they don't!