How to Move with Pets, in Thunder Bay 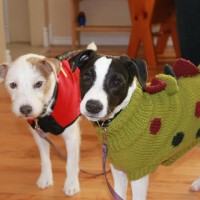 How to Move in Thunder Bay, with Pets

By Danielle Wilson on February 28, 2014 in For Home Buyers, Moving with Pets, Young Families

Many of you who know me know that I absolutely adore my pets.  For those of you who don’t know me, I have 2 Jack Russell Terriers (Tipper and Napoleon) and 1 Cat (Jersey).  It could probably be said (and probably has), that I love them more than almost anything else in this world.  So, it would come as no big surprise to you to know that when we sold our house this passed October in favour of a rural home with a bit of acreage, one of the main concerns that I had was how we would make the transition as smooth as possible for our pets.

We had moved once before, when we were in our early 20’s, from our 1 bedroom 500ft2 home on a dugout to our Current River wartime special (a 1.5 Storey war time home).  I remembered that move as being very stressful for our pets, as they were home amidst a ton of packing boxes and no clear plan of action to be seen.  In fact, one of my dogs was sick for almost 2 weeks after the move, and I know it was because we didn’t think of their needs at that time.  We had traumatized our poor little crew.

Wanting to avoid traumatizing my pets this time around, it was important to me that things progressed in a controlled manner with the changes around our house happening on a fairly smooth continuum.

Packing took place steadily so that we weren’t making major changes all at once.  We had a time lapse between our closing dates, so we had rented a storage unit, and day by day, box by box, we would take loads out to the unit.  Our pets weren’t really noticing too much amiss, and I certainly felt pleased that we were making such great headway.  I left their toys, beds, kennels and food and water dishes until the very end.  These special items came out to the truck at the same time that we all did, along with them.

We had a 12 hour drive to complete, as the dogs, cat, and I would be staying with my Parents (which was hugely generous on their part) considering they had 2 dogs and 4 (yes 4) cats of their own.  My Husband luckily would be away at work.  I had talked to our Veterinarian in advance of the trip, primarily discussing how the long drive would affect my cat, who has extreme anxiety in a vehicle.  Ultimately we decided on a combined course of action where Jersey would travel lightly sedated in her kennel, which would be sprayed with a product called Feliway, which is a pheromone specific to cats and conveys a message of security, reassurance, and wellbeing to cats.  I highly recommend this product as we had great success using it, and I continued to use it throughout the remainder of the transition.

When our possession date finally came along, we boarded our 2 dogs and cat for the day.  This was ‘The Day’ that the moving van would be doing the bulk of the work, moving all of our big things and the majority of our boxes into our new home.  I was also able to set out all of the dogs toys, their beds, kennels, food and water bowls, as well as Jersey’s favourite things.  When I picked them up and brought them to our new home, and got to watch them running around investigating their new ‘areas’, I could tell that they knew that this was to be their new home!  As they say, home is where the heart is, and in this case, the right preparations had conveyed alot of love to our pets!

Dealing with Tenants
Firewood 101; 3 Key Learnings in Heating a Home with Firewood

Danielle was the best agent we could have ever asked for! She helped us sell our home and find a new one in town. Danielle made us feel like family, was available through text whenever we had questions, and was always willing to take us to see various houses over a few week period until we found one we loved. She worked with our schedule always, and helped us make an offer on a beautiful home! We bought our previous house privately and wouldn’t ever recommend doing it privately again. If you’re using an agent, we highly recommend Danielle with RE/MAX.

Thank you Danielle for taking the time to help us locate a house. I sincerely appreciate the time you spent going through the different properties that were out there and zeroing in on what we wanted in a house. Your advice was very helpful and gave me a new perspective on available properties. We especially appreciated you going above and beyond your means as a Real Estate agent by chasing me all over the city. I will so use you again when it's time for my family to either move onto a new house or to procure property for camping. Again, thank you so much for your help. I greatly appreciate the assistance and the guidance you have provided me.